The Premier of the Zenica-Doboj Canton has approved Adriatic Metals’ application for a significant land extension to its current Concession Agreement.

Under the terms of the original Concession Agreement, the Company has three fields, being Veovaca I & II and Rupice-Jurasavac Brestic, as outlined in Figure 1 below. The approval of the second amendment to the Concession Agreement extended those fields into the areas adjacent to the original fields. This third amendment that covers areas Borovica-Semizova Ponikva (“Semizova Ponikva”); Orti-Seliste-Mekuse-Barice-Smajlova Suma-Macak (“Vares East”); and Droskovac-Brezik (“Brezik”), represents a significant milestone for Adriatic, and the Zenica-Doboj Canton Government. The area covered by this new agreement is 3,212 ha or 32.12 km2 . Total area covered by Adriatic Metals’ concessions is now 4,078 ha (40.78 km2 ). 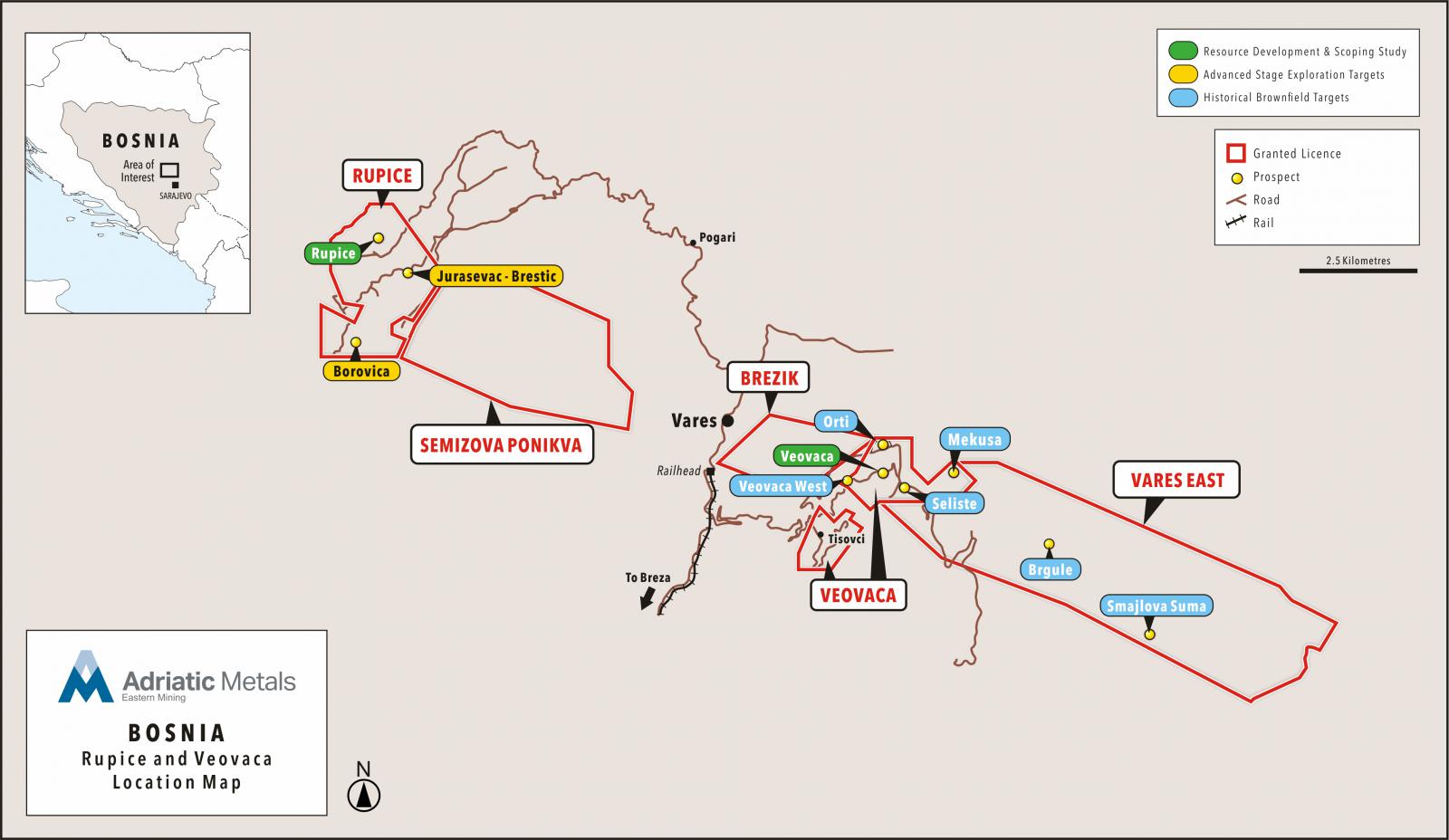 The significantly expanded Concession area includes an area between Veovaca and Rupice (Semizova Ponikva & Brezik), and to the east of current Veovaca concessions (Vares East). This area is therefore a high priority for further exploration and drilling, and the Company will now make all the required steps for Exploration Permits following an upcoming campaign of airborne geophysical surveys to complement the existing historical data and geochemical surveys recently completed by the Company.

We look forward to following up on our geophysics and the historical data with modern exploration techniques and focussed drilling campaigns. The land expansion importantly gives all necessary access for drilling and to allow ground-based exploration over the significant anomalies.

The Brezik Concession (aka Brezik-Droskovac), to the west of the Veovaca deposit, hosts the disused Brezik iron-ore mine and the historical Droskovac iron-ore mine. Droskovac was historically mined in the 1980s for iron ore, but it has a historical A + C1 resource of 0.9Mt @ 1.0% Zn & 2.9% Pb. See Figure 2. This is concession is along trend from the Veovaca West brownfield target, a site where previous mining of base metals was conducted in the Austro-Hungarian era. 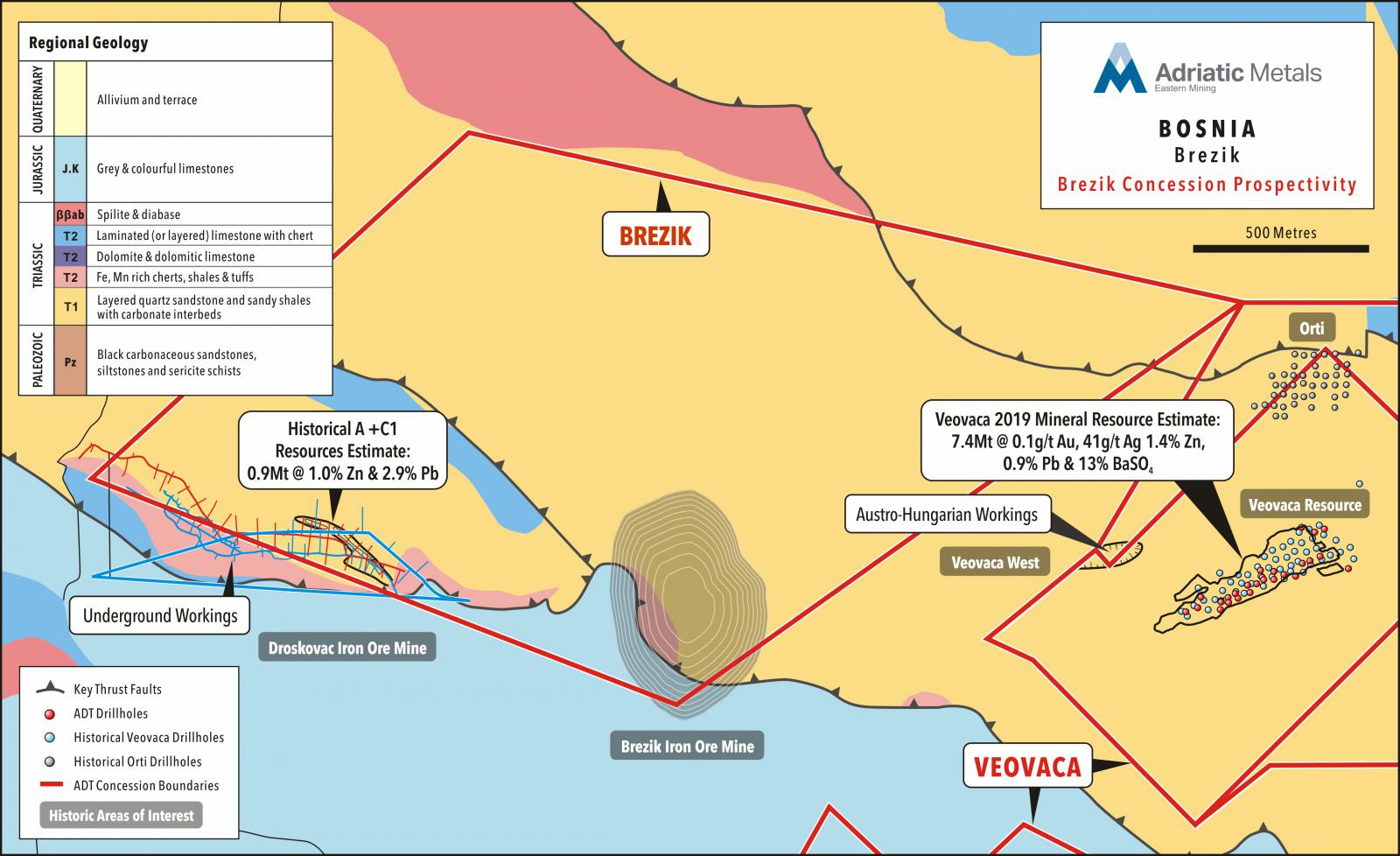 At Vares East, in Bosnian, Vares Istok, historical exploration has previously been undertaken at Barice (Cu), Grubanovici (BaSO4, Cu), Ljevaci (BaSO4), Smajlova Suma and Debele Mede (BaSO4); which yielded positive results from geophysics, trenching and underground development. Eastern Mining conducted a ground truthing survey to assess these historical areas of interest, and yielded sample results such as 23% Cu and 54g/t Ag at Barice (quartz sulfide vein); 89% and 39% BaSO4 at Grubanovici and Ljevaci; and multiple samples of more than 89% BaSO4 from old trenches at Debele Mede. For the first time since the 1960s, Adriatic will be using modern exploration techniques to follow up on these encouraging historical results, see Figure 3.

The land expansion has been planned to give access for modern exploration and drilling over the entirety of the significant base metal prospects; where historical exploration yielded positive results from geophysical IP, trenching and sampling. 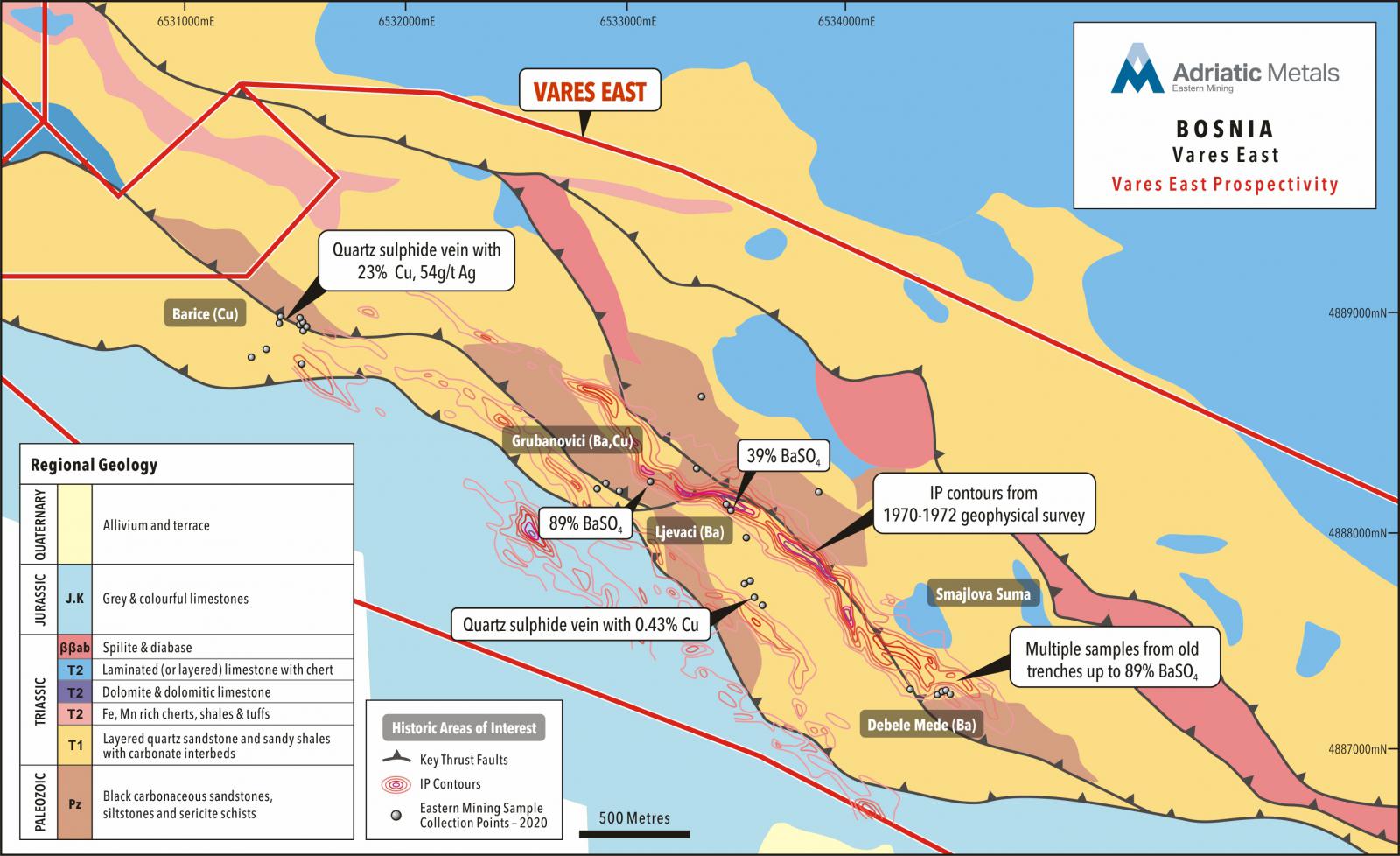