The state geological survey reported a resource estimate for the Kizevak, Sastavci and Karadak deposits in 1994 shown in the table below. This data presents Tethyan with immediate drill targets and further work including soil sampling, mapping and geophysical surveys will be completed to generate additional exploration targets. 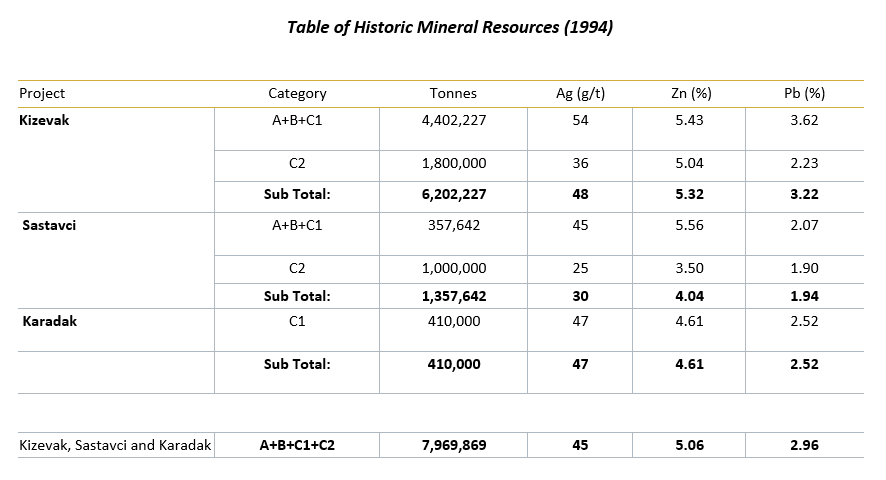 The historical resource estimate was derived from the “Report on exploration for lead and zinc at the Kizevak-Karadak area in 1994” dated 1995 and authored by Mr B. Rudulović (Izveštaj o istraživanju olova i cinka u području Kiževak - Karadak u 1994. godini). Yugoslav GKZ mineral resource estimates were always stated as “reserves” and classified according to the A+B+C1+C2 or “alphabetical” classification, which was derived from the Russian system and is still applied throughout many countries in southeast Europe. The reserves had to be approved by the official Commission for Ore Reserves. The A, B, C1 and C2 categories reflect the levels of confidence in the actual tonnage exploited from a reserve, with confidence levels being - 95%, 80%, 70% and 35% respectively. Henley (2004) and others have evaluated the alphabetical classification system with respect to the compliant codes in Canada and Australia, and concluded that A+B is comparable to “measured”, C1 to “indicated” and C2 to “inferred” in internationally acceptable codes for reporting resources. However, these comparisons are only an approximation, and cannot be considered as equivalents.