The Rupice prospect is located 12 km to the northwest of Veovaca on the western slope of Kiprovac Ridge. Other known prospects include Jurasevac-Brestic and prospects in the Borovica corridor (Kraljeva Jama, Siroki Radakovac, Ceo Sutjeska and Zakruzje).

Exploration activities in the Rupice area commenced in 1952 and continued intermittently until 1990, initially focusing on barite mineralisation and later on the polymetallic mineralisation.

Exploration activities including geophysics (IP – chargeability), costeans, exploration adits, and drilling. These indicated the presence of polymetallic mineralisation at Rupice and Jurasevac-Brestic. Chargeability anomalies extend to the south-east between Rupice and Jurasevac-Brestic but these trends have not been drill-tested. Other anomalies in the area (at Gornja Borovica and Donja Borovica localities) have not been followed up by drilling either, and have recently been added to Adriatic's extended concession area.

During 2018 Adriatic drilled BR-17-18 on the boundary of the original concession area, intercepting 66m of high-grade mineralisation. The company successfully sought to extend the concession boundary, and is now drilling in the northern plunge of the deposit, and has recently intercepted thick, high-grade mineralisation to the north, and south east toward Jurasevac-Brestic.

Rupice remains open at depth, to the north, east and south. 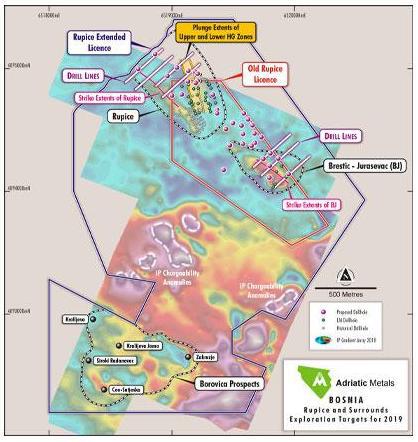