Expected payability adjusted recoveries from all concentrates for Rupice are:

Current test-work confirms that the same process plant can process both Rupice and Veovaca ores.

The test work programmes were carried out by Wardell Armstrong International (WAI) under the guidance of Adriatic’s own metallurgical consultant.

Suitable samples, representing the Mineral Resources from both deposits were selected and sent to WAI for separate testing of Rupice samples and Veovaca samples. The objective of the testwork programmes was to establish basic processing data, to test processing options and to develop and test a flowsheet that would demonstrate that a marketable concentrate could be developed from each deposit.

Metallurgical bulk samples were collected from across the entirety of the deposits using drill core from the 2017 and 2018 campaigns (BR-1-17 to BR-8-17 and BR-1-18 to BR-24-18) for Rupice, and the 2017 campaign (BV-2017-1 to BV-2017-9) for Veovaca.  The material consisted of drill core (half HQ) crushed to -2mm with care taken to collect representative material from the mineralised intervals in continuous lengths of between 6 and 10m with the aim to produce 3 samples for Rupice:

An average grade bulk sample which approximated the average grade of the Ore Block Model (OBM) current at the end of 2018 made up of 114 x 2m samples weighing 136kg;

A high grade bulk sample (being approximately twice the average OBM grade) made up of 69 x 2m weighing 91kg; and

And a single sample for Veovaca made up of 97 x 2m samples weighing 100kg. The average OBM grades together with the estimated grades of the bulk samples and their “head grade’ as determined by Wardell Armstrong International (WAI) are listed in Table 1.  Chain of custody from the Company’s core-farm in Vares, Bosnia to the offices of WAI, UK was secure with the consignment sealed for customs purposes at point of preparation, and remained sealed through delivery to WAI. 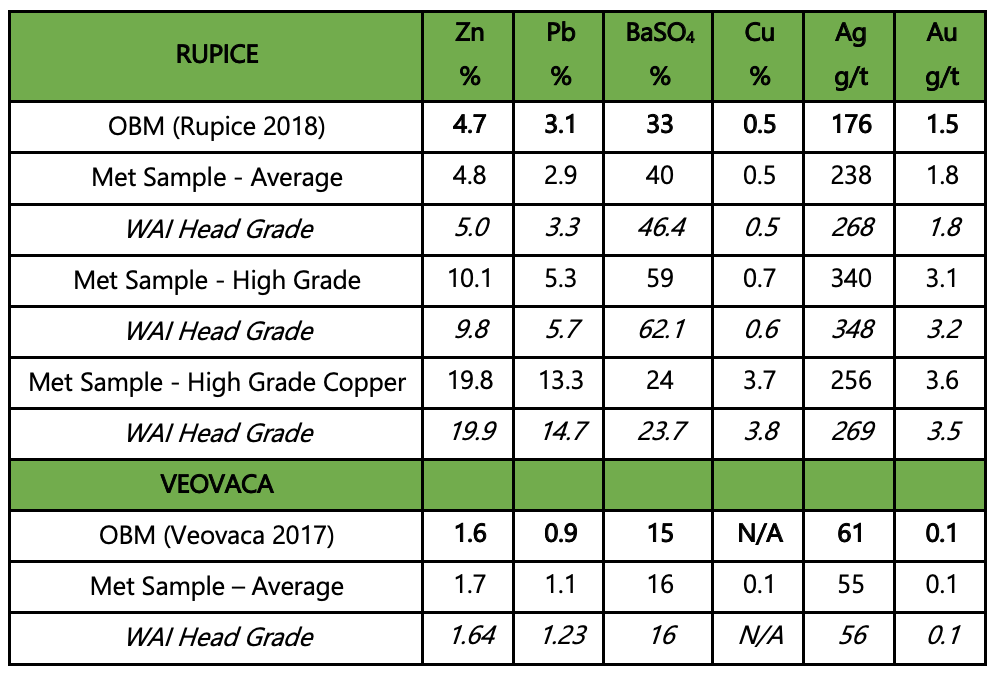 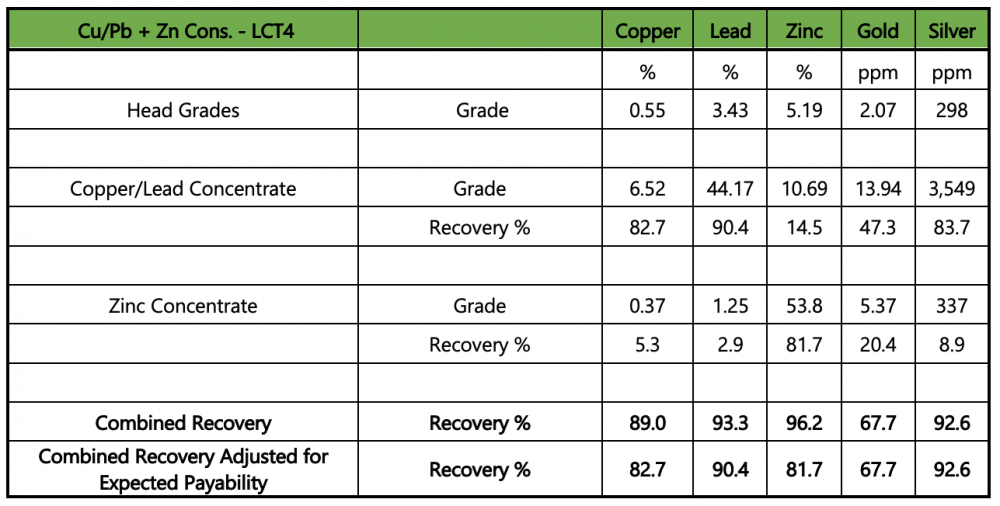 A detailed analysis of the test products identified the copper/lead concentrate as being very high in gold and silver content (13.9ppm Au and 3,549ppm Ag). The zinc concentrate also contained significant levels of gold and silver (5.37ppm Au and 337ppm Ag). Levels of some deleterious elements may incur minor smelter penalties, but these are generally low and not expected to be material, whilst other deleterious elements, such as Antimony, are concentrating to a sufficient grade that in some smelters would either attract no penalty or be payable.

The barite concentrate collected from LCT2 assayed 94.1% BaSO4 at a recovery of 71.7% and had a specific gravity (SG) of 4.49, well above the American Petroleum Institute (API) specification of 4.1. See table 3 below; 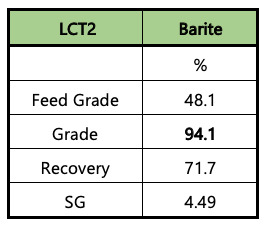 The results of other locked cycle tests indicated that recovery to the barite concentrate was fairly consistent at producing a saleable grade and specific gravity.

Additional analyses undertaken on samples of batch cleaner and locked cycle test barite concentrates found that all of the requirements of the API specification for drilling-grade barite were met with a significantly high SG confirming that the barite is of very good quality. Levels of some potential impurities (Hg, Cd, Pb) may require further investigation and alternative metallurgical solutions will be tested if required following discussions with protentional off-takers.

With a view to improving the payability of the copper in the Cu/Pb concentrate it was decided to carry out the first stage of the next level of flowsheet investigation test work and look at a sequential removal of copper first, followed by lead, zinc and barite. This would give an additional concentrate but with greater value coming from the copper as a result. This recent investigation using a sequential flowsheet has yielded promising results as per Table 4 below;

Locked Cycle Test LCT5 produced a copper concentrate assaying 22.9% Cu, 15.8% Pb and 5.45% Zn at recoveries of 63.0%, 6.9% and 1.5% respectively. The copper concentrate also contained significant levels of precious metals (14.1ppm Au, 7,235ppm Ag). Optimisation work of this flowsheet will be ongoing in the next phase.

To date very little work has been done on the High Grade and the High-Grade Copper samples (each referenced in Table 1) and this will also form a part of the variability and other test work in the future.

Wardell Armstrong International (“WAI”) was commissioned by Adriatic Metals plc to undertake a programme of metallurgical testwork on a sample of mineralisation from the Veovaca deposit. Work commenced in October 2017. The sample contained 1.13% Pb, 1.64% Zn and 16.1% BaSO4.

A Bond Ball Mill Work Index Test (BBWi) gave a work index value of 12.3 kWhr/tonne, classifying the material as having a ‘medium’ hardness.

A total of 31 rougher tests, 19 cleaner tests and two locked cycle tests were undertaken.  It was found that satisfactory lead and zinc recoveries could be achieved into separate concentrates using a sequential flowsheet of lead followed by zinc flotation. In addition, barite flotation of the zinc tailings produced a barite concentrate grading 95.4% BaSO4 at 71% recovery after two cleaning stages.

A locked cycle test was undertaken to give the final concentrate and metal recoveries and the results are given in the Table 5 below.

Both Veovaca concentrates contained levels of penalty elements. The reduction/removal of these penalty elements is being investigated metallurgically and work to date demonstrates that this is possible using proven technologies such as alkaline sulphide leaching.

Due to a build-up of circulating loads during cleaning, the barite recovery in this LCT was not as good as earlier open circuit tests which showed the following potential:

As with Rupice the Veovaca barite has a very high SG making it a quality product. Levels of potential impurities may require further investigation and alternative metallurgical solutions will be tested if required following discussions with potential off-takers.

Flowsheets developed for both Rupice and Veovaca are similar utilising crushing, grinding and multi-stages of flotation with regrind. Reagent suites will vary slightly as will reagent consumptions. Primary grind would be 80% <40µm for both Rupice and Veovaca with regrind at Rupice being 80% <10µm for the Cu/Pb concentrate and 80% <20µm for the Zn concentrate. Veovaca regrind would be 80% <20µm for both Pb and Zn concentrates.