The Rupice and Veovaca projects are located approximately 8.7km west-north-west and 3.5km east respectively from the town of Vares and 35km to the north-north-west of the capital city Sarajevo. The Rupice deposit is largely a greenfield site located some 1.5km from the nearest small village of Borovica Gornja and no infrastructure currently exists at the proposed mining operations. The site is currently accessed from the main sealed road. Travelling north from Sarajevo on the R444 and then turning west onto the R444a, north of Vares, toward the site. From the R444a, a secondary sealed road (bi-directional single lane) accesses the village of Borovica Gornja and ultimately the exploration site via an unsealed exploration track in reasonable repair. There are no waterways or channels within close proximity to the project area and all construction material, equipment and consumables will need to be transported via rail or heavy truck and trailer from Sarajevo or Ploce port located on the coast of Croatia. 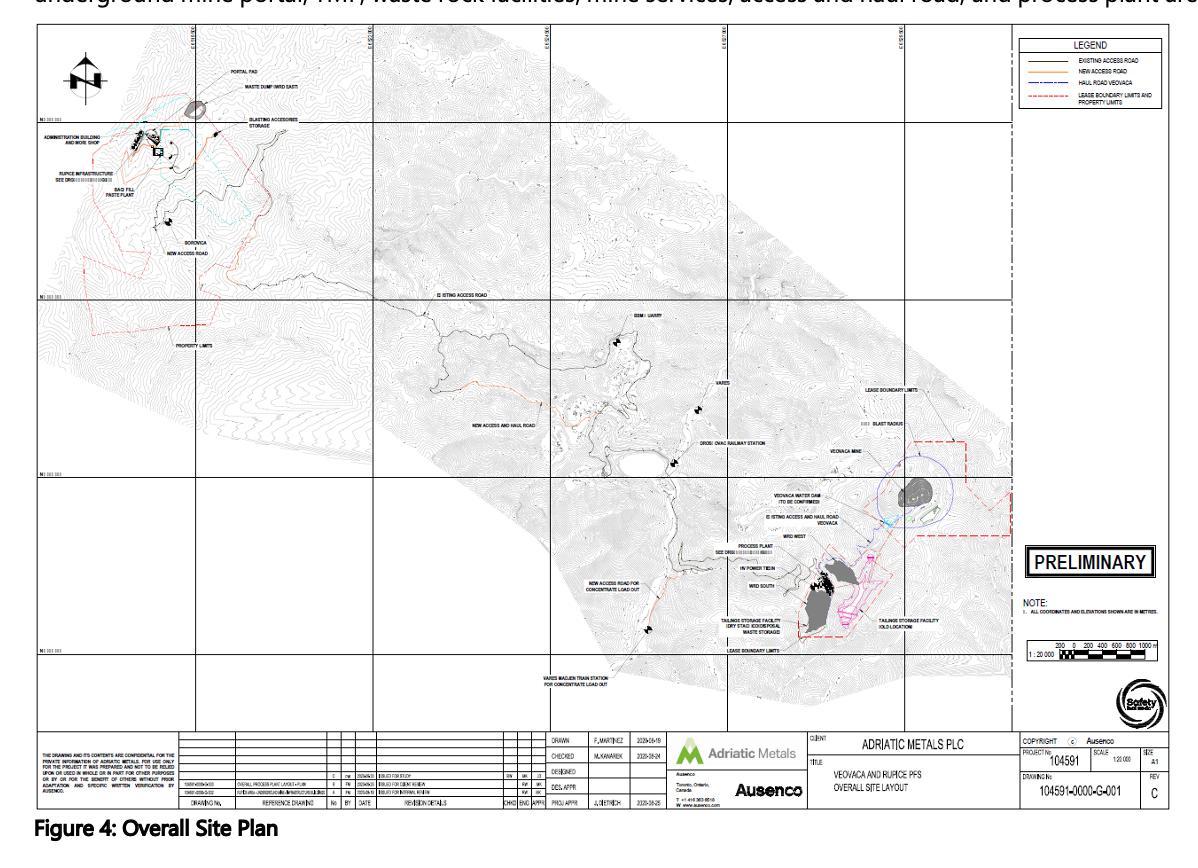 The existing power distribution network infrastructure in the Vares region is provided by the Public Enterprise Electric Utility of Bosnia and Herzegovina (EPBiH) and consists of a north-south 220KV and 400KV line in close proximity to the town of Vares. Additional 132 KV network lines, run north-south in close proximity to the Rupice mine site along the main sealed R444a road.

Construction of approximately 2.5 km of 35 kV overhead line will be required to connect to the 132 KV line for distribution to the Rupice site location. The new 35 kV overhead distribution line will be constructed by the utility company to deliver the expected load of 8.9 MW within the Rupice site area. This will be stepped down to 10 kV for local distribution on feeders to the paste plant, local electrical room, administration & ancillary buildings, aggregate crusher, primary crushing station, and underground mine reticulation. Electrical power to surface infrastructure consumers will be supplied at 400 V via secondary distribution transformers which will feed 400 V motor control centres or distribution panes. Electrical power to underground mining consumers via the underground reticulation will be supplied at 10 kV and stepped down via secondary distribution transformers which will feed 1 kV underground power distribution centres. Emergency power for the critical underground loads will be provided by a 1 MW emergency diesel generator located near the 35 kV to 10 kV substation.

There is currently a 35 kV tie-in connection from the HT electrical network to the existing main substation building at the Veovaca site next to the administrative building. The electrical infrastructure will be refurbished and stepped down to 6 kV for power distribution. From this 35kV/6kV substation, local 6 kV feeders will provide power to the process plant, administration building and open-pit dewatering pump station. A peak demand of 12 MW with an average load of 10.3 MW is required for the processing area at Veovaca. One 2.5 MW diesel generator, located close to the main 35 kV to 6 kV substation, will provide emergency power to the process plant at Veovaca.

The Veovaca site contains existing unpaved roads around the legacy infrastructure from the previous operation. Minor upgrades will be required, as well as 495 metres new road building to the South of the existing thickeners to allow for full ring-road access around the process plant infrastructure.

The Rupice site is currently accessed from the main sealed road. Travelling from north from Sarajevo on the R444 and then turning west onto the R444a, north of Vares, toward the site. From the R444a, a secondary sealed road (bi-directional single lane) accesses the village of Borovica Gornja.

The proposed mine haulage route for the purposes of transporting material from the Rupice mine to the processing facility and the subsequent transport of dewatered tailings back to the proposed route of 28.1 km is comprised of three main areas:

All mine vehicles, other than underground vehicles, will comply with state laws and will be legally allowed to travel on public roads.

There is currently no mining infrastructure at the Veovaca deposit, however, a derelict processing facility is located some 2 km southeast of the proposed surface operation. A large administrative building, located at the plant site, is currently at an advanced stage of repair and refurbishment.

As shown in Figure 5, the process plant is separated into three main buildings located southwest of the open pit mine and southeast from the town of Vares. The three buildings are the grinding/classification building, flotation/regrind building, and concentrate filter building. All buildings are pre-engineered structures, supported on reinforced concrete footings and are complete with concrete slabs and pedestals. All pre-engineered buildings will be fully enclosed with insulated metal panel (IMP) roof and wall cladding.

Ancillary facilities at Veovaca includes a modular laboratory and other fabric buildings such as tailings storage building, concentrate filter tank and air services building and the workshop/warehouse buildings. All fabric buildings are supported on a reinforced concrete raft foundation. 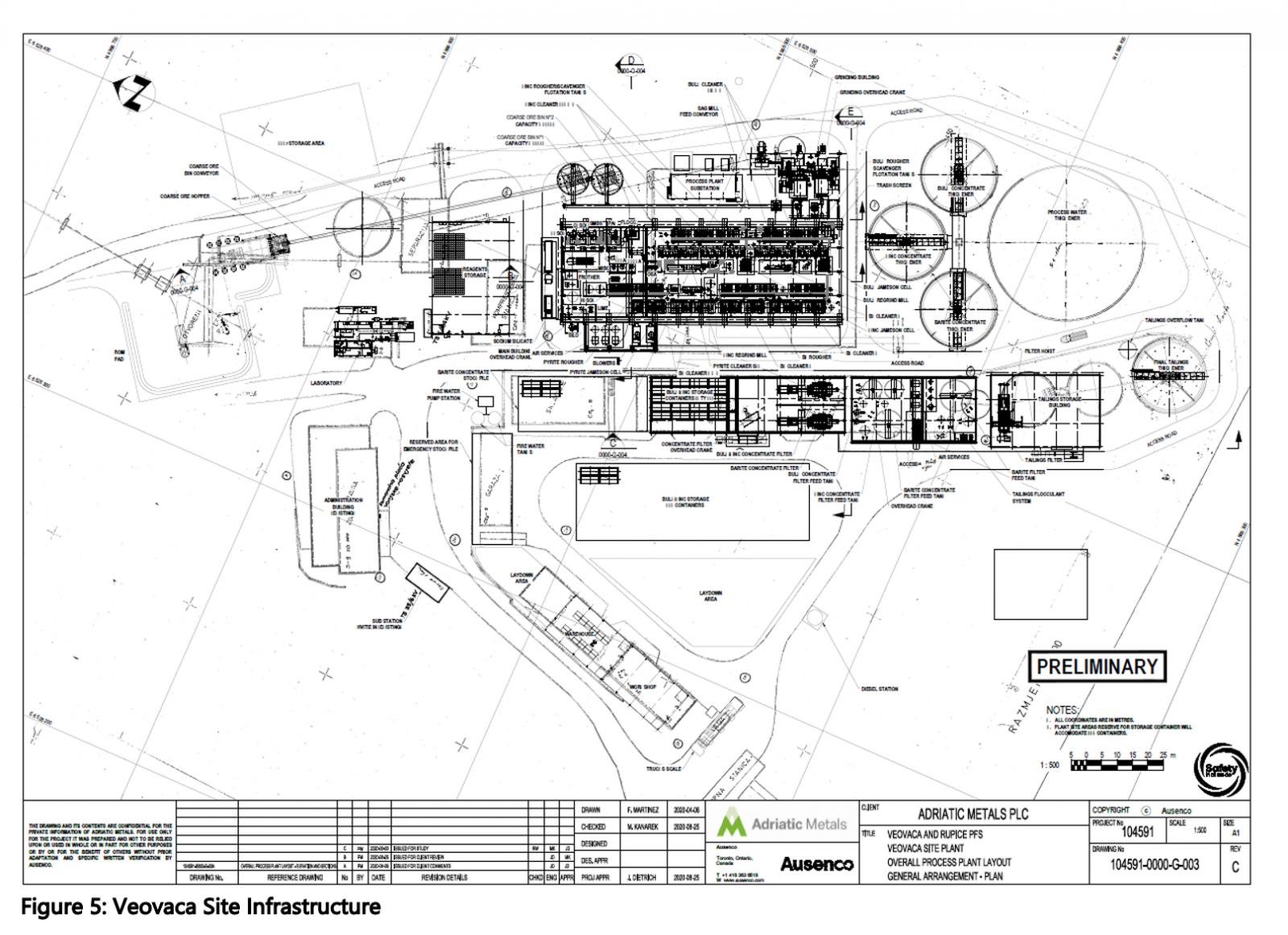 From the portal to the west, a low-cost single storey wood-frame building has been considered to house the administrative offices, lamproom and changehouse. The other ancillary buildings supporting the Rupice mining operation will be fabric type buildings and supported on a reinforced concrete raft foundations. These include the workshop/warehouse and washbay building, fuel and lube storage building, mine storage area, backfill paste plant building and compressor building. 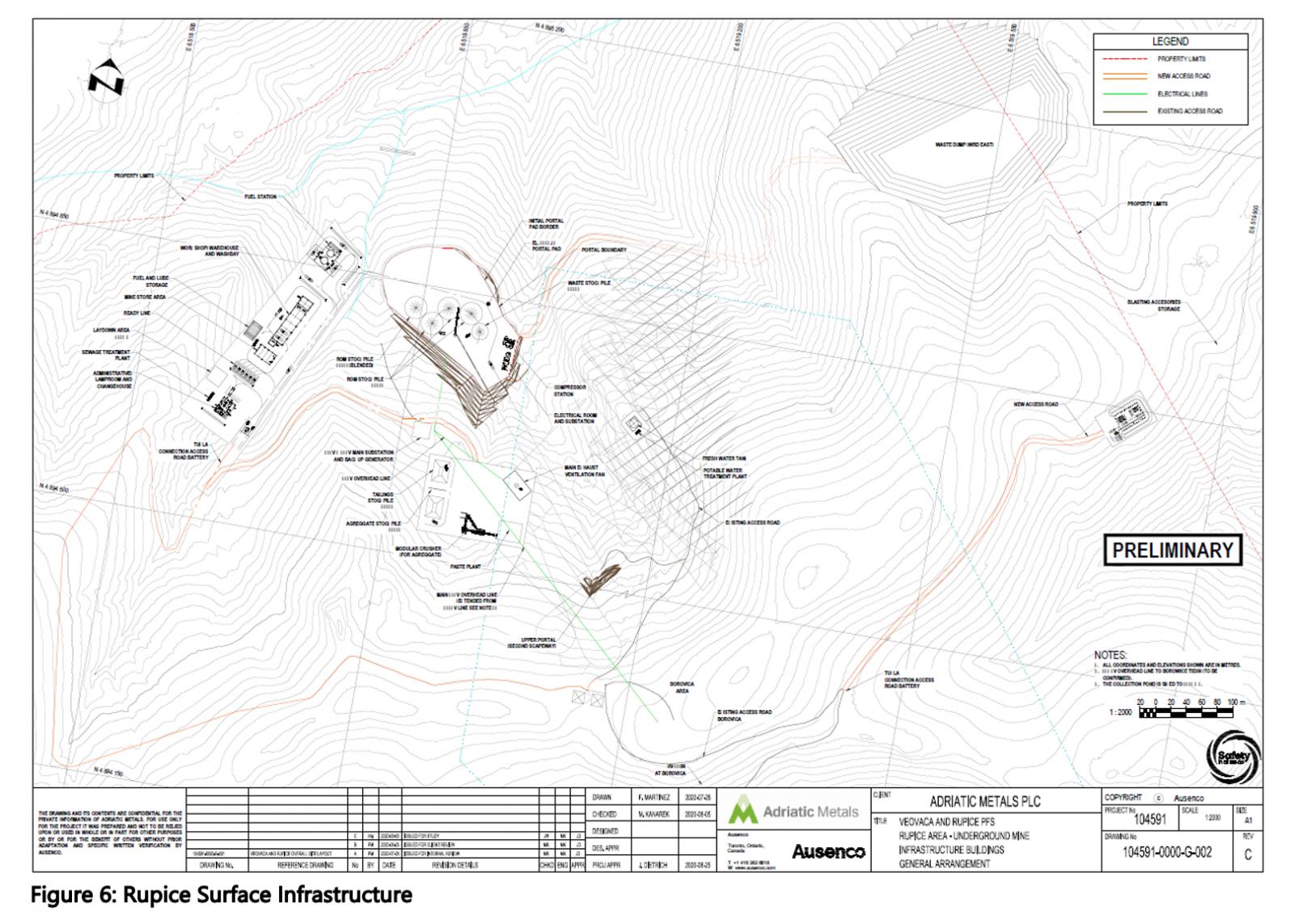 The TMF has been designed to international design codes and standards, such as those prescribed by the Australian National Committee on Large Dams and Canadian Dam Association

Over the first nine years of the mine life, it is envisaged that most tailings produced from the processing of Rupice ore will be returned underground as backfill. Tailings generated in excess of backfill demand, will be stored in a dry-stack tailings facility, to be developed in the valley immediately south of the former Veovaca processing plant, as shown on Figure 5. Tailings generated from the processing of the Veovaca deposit will be also be stored in the dry-stack facility. 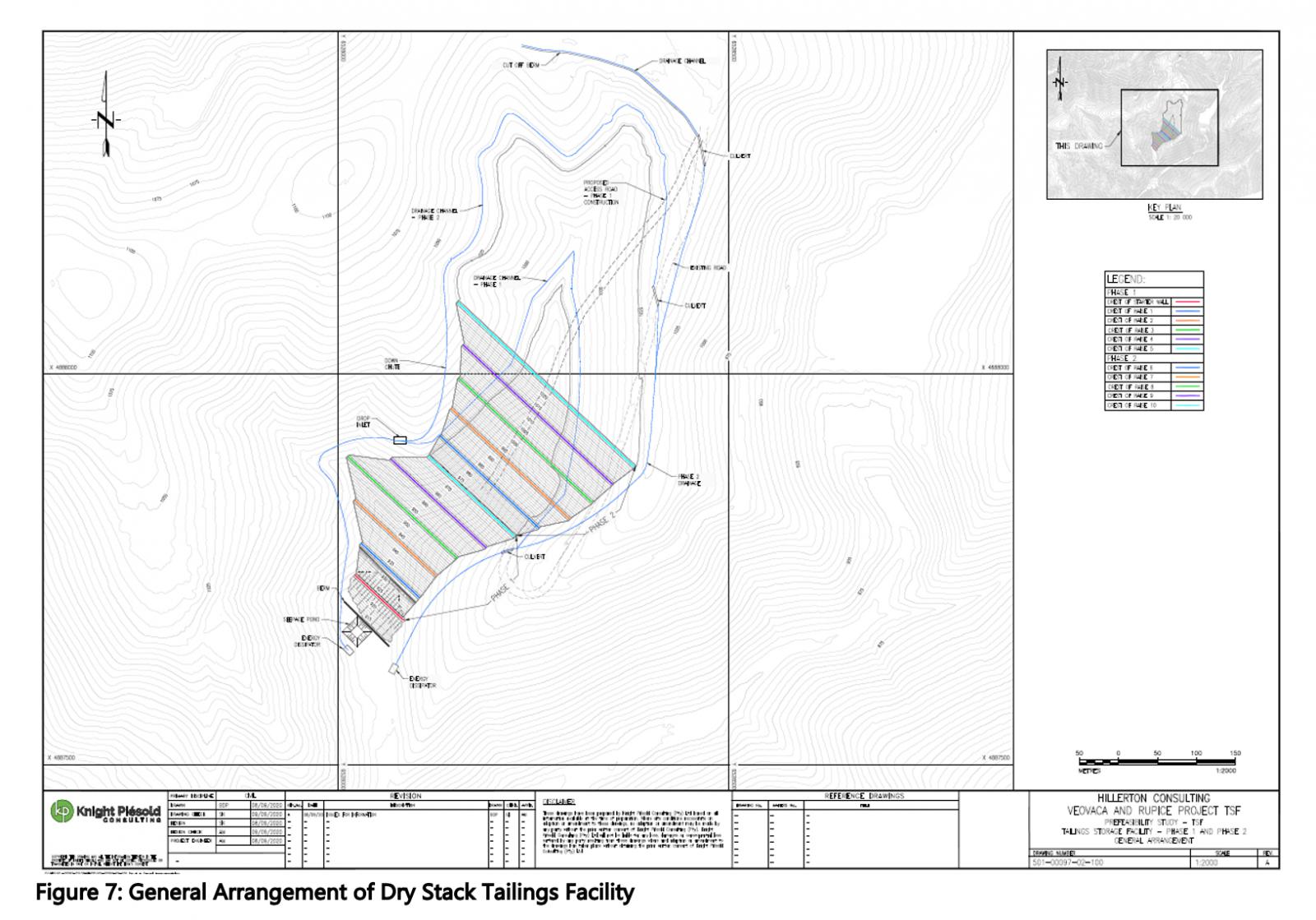 The TMF will be constructed in two stages, providing with capacities of 1.5 Mt and 4.1 Mt respectively at an assumed average dry density of 1.65 t/m3. The starter embankment is constructed of rock fill, and the facility will employ upstream construction techniques utilizing compacted filtered tailings.

Diversion ditches upstream of the deposition area will divert meteoric water away from the facility. Contact water and seepage will be captured in ditches and a High-density polyethylene (HDPE) underdrain system reporting to a downstream collection pond to be pumped back to the process plant. The seepage pond and drainage channels will be lined with an HDPE liner.

The Veovaca and Rupice sites have been undertaking hydrological monitoring and studies since 2018 in both catchments to build a data-base describing surface water flows, correlated rainfall and meteorological information, water quality analyses, and hydraulic tests to determine the baseline hydrological processes and behaviour. Since 2020 a more detailed suite of studies assessing potential underground mine hydrogeology and groundwater control (dewatering) has been undertaken. Additional studies include surface water supply potential at Rupice and Veovaca and assessment of potential surpluses and deficits of water resources across the mine systems (water balance) and design work on the necessary water management system for the operations.

Following Environmental Scoping carried out in 2019, additional measurements have been established. This was based on the recognition that the stream flow recordings in the Veovaca catchment area (the Mala river) were influenced by a regulating effect from the upstream TMF. The Rupice catchment where the underground mine will be located is affected by the dolomitic limestone hydrogeology of the area which results in spring discharges, a modified streamflow hydrograph due to groundwater baseflow and rapid recharge components affecting groundwater flow. Additional measurements were established to record flow, water level and water chemistry of the surface water, additional spring monitoring and groundwater wells. In both catchments the frequency of recordings for stream flow and water level measurements were increased to 15 minute intervals so that the effect of storm events and short-term rainfall could be evaluated as these were likely to convey rapidly through the limestone catchment and be materially significant to the water balance of the hydrological systems.

The project requires approximately 5 l/s and 8.6 l/s respectively as make-up water from the respective catchments for the Veovaca and Rupice sites. In both catchments, this raw water will need to be supplied from surface water systems using reservoir impoundments to store sufficient volumes to enable reliable supply during dry periods.

Ground water inflow into the underground mine has been modelled using available hydrogeological information. The assessments are steady-state and analytical meaning that the calculations are based on lumped average parameters and general mine design descriptions. Inflowing groundwater may be affected be acid generating metalliferous geochemical reactions in the ore, hanging wall and footwall zones although there is some likelihood, still to be confirmed and modelled, that the natural alkaline limestone water quality may neutralise some of the acidity and limit metal dissolution. While the steady-state predictions indicate flows will reduce during the life-of-mine, the effect of geo-mechanical stress relaxation from stoping could induce greater fracture flows through the groundwater system.

A site wide water balance for the operations was developed for the PFS based on mine production, water demand, run-off and supply from the reservoir sources. The water balance indicates the operations are continually net negative i.e. requiring make-up water. This means that aside from standard water drainage philosophies of segregating contact and non-contact site run-off, the water discharges from the project should be limited.