Drilling at Veovaca has added gold and silver to the entirety of the Mineral Resource estimate and increased the Indicated Resource Category to 71%. The Veovaca Mineral Resource begins at surface and currently extends to depths of 200 m.

A total of 84 diamond drill holes (51 historical drill holes and 33 drill holes from Adriatic Metals’ 2017 (16 holes) and 2019 (17 holes) for 11,745 m define the Veovaca deposit, of which 83 assayed drill holes intersect the interpreted mineralisation zones. The Veovaca deposit was sampled using diamond drill holes at nominal 20-25 m spacing on 20-25 m spaced northwest-southeast oriented sections. All of the historical holes were vertical. Holes drilled by Adriatic Metals were generally angled 60° to 70° towards the north-northwest with dip angles set to optimally intersect the mineralised bodies. Diamond core has been sampled for assay; whole core for the historical drilling and half core (HQ) for the recent drilling. Recent assays were undertaken by ALS and SGS, both located in Bor, Serbia. Further information is provided in the Veovaca JORC Table 1. 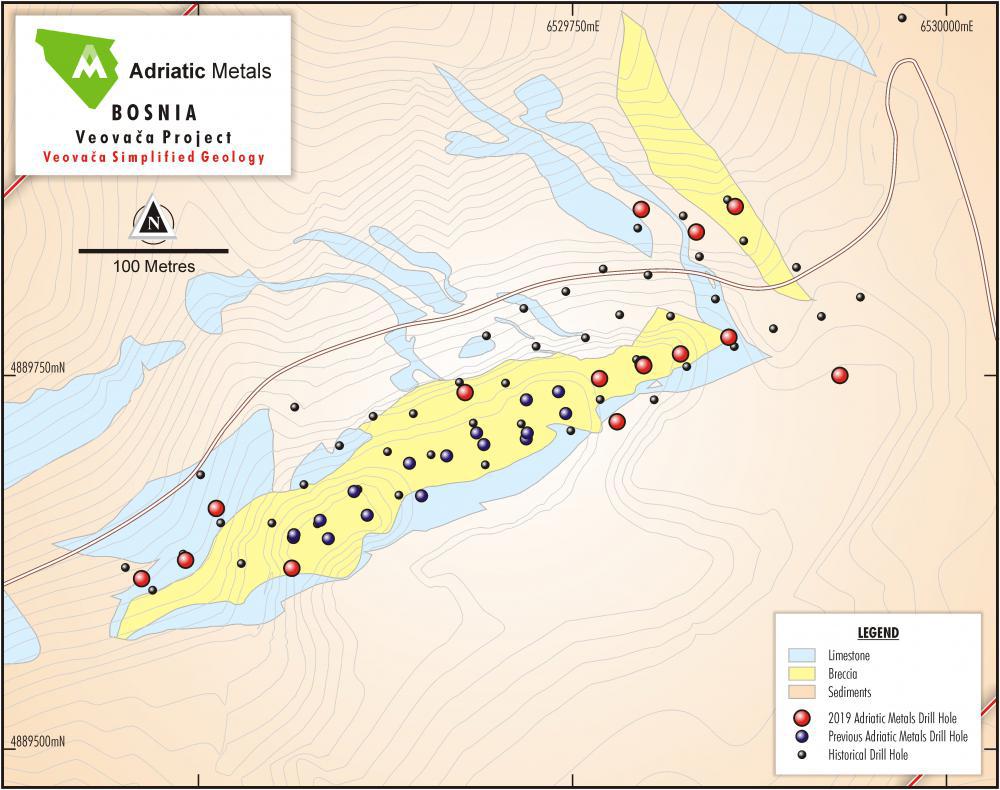 The polymetallic mineralisation is associated with Middle Triassic rining. The mineralogical assemblage of the ore is relatively simple, it typically consists of pyrite, sphalerite, galena (argentiferous), barite and chalcopyrite with minor gold, tetrahedrite, boulangerite and bournonite. Sphalerite is particularly light in colour suggesting that it has low iron content.

Mineralisation outlines were developed separately for each element using individual cut-off grades that were established using geostatistical analysis. Five elements were modelled; Zn, Pb, BaSO5, Au and Ag and three of them (BaSO5, Ag and Au) had two grade domains interpreted and modelled. 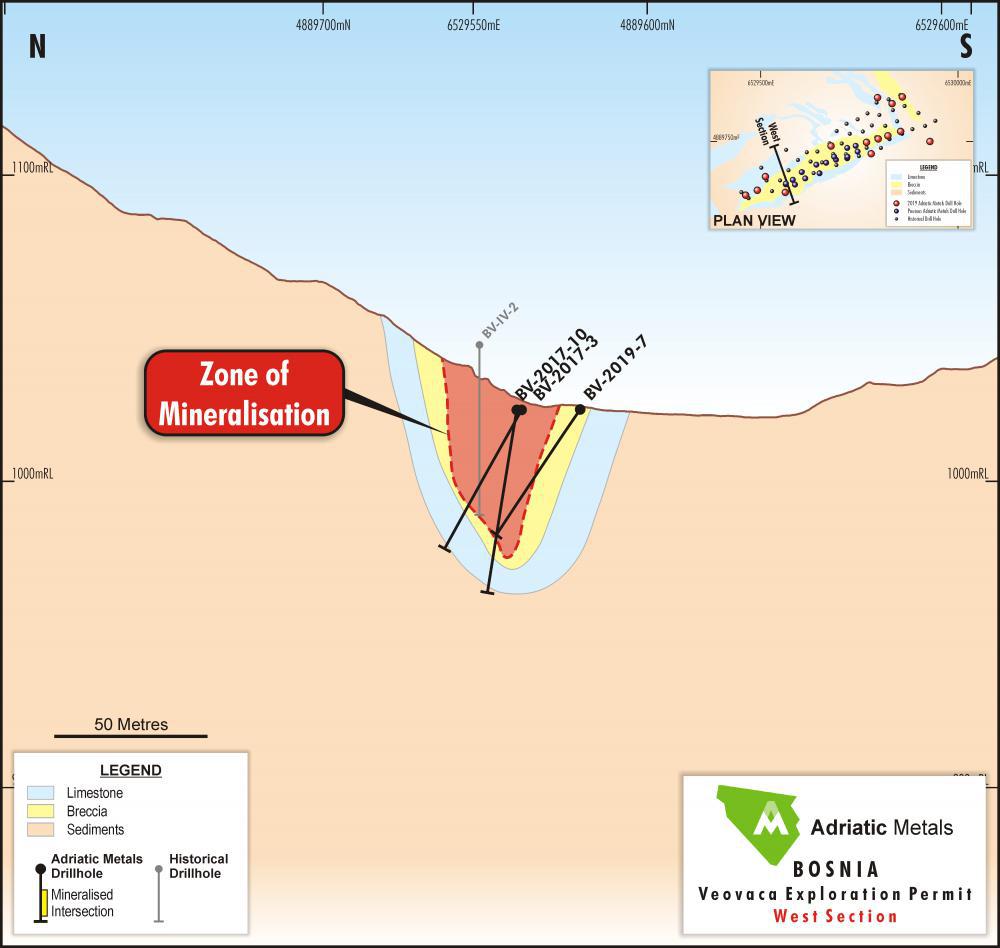 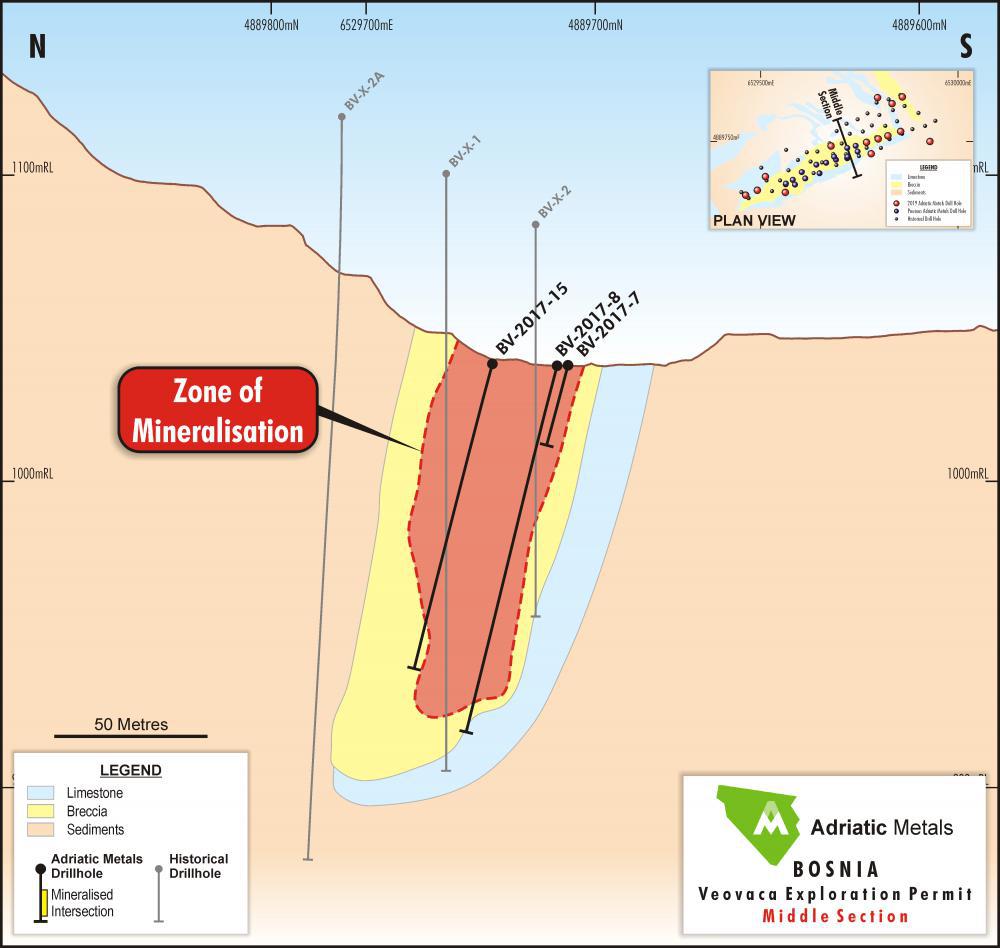 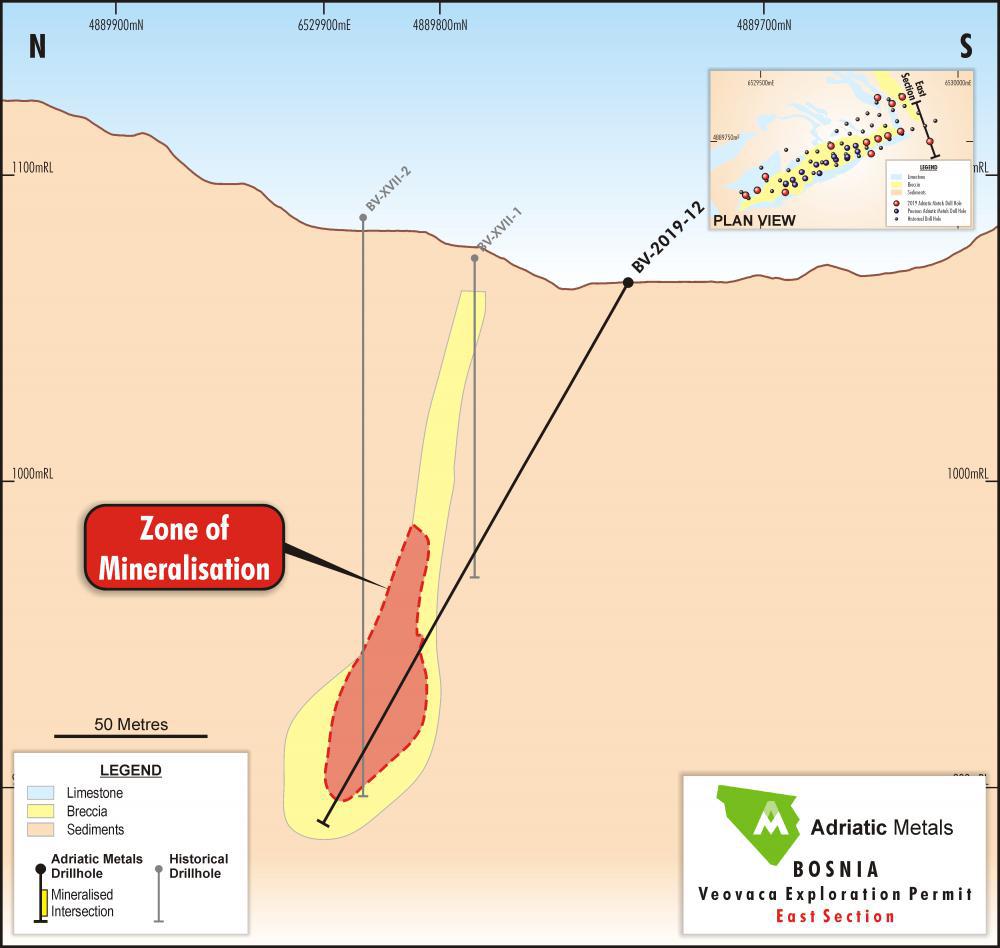 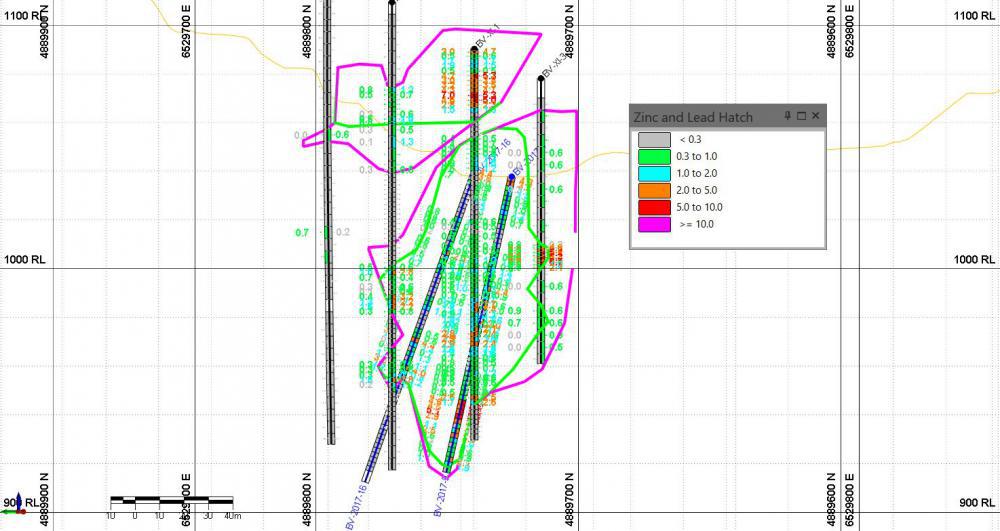 The interpreted strings were used to generate 3D ‘solid’ wireframes for each modelled element (Figure 6).  Every cross section was displayed on the screen along with the closest interpreted section.  If the corresponding envelope did not appear on the next cross section, the former was projected half way to the next section, where it was terminated.  Every interpreted lode was wireframed separately and individually.  All wireframe models were validated for closure and no overlapping triangles. 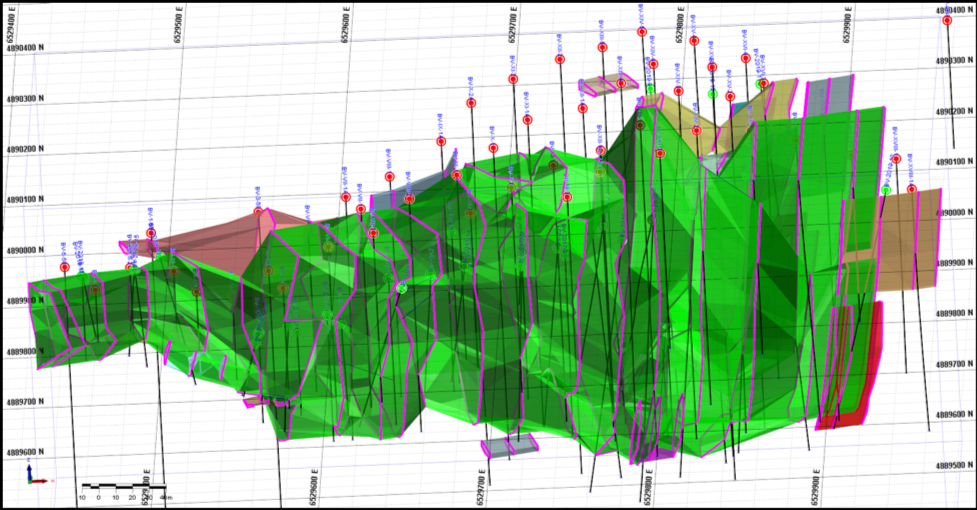 Density measurements were taken from core samples.  A total number of 1,518 samples from 47 holes were analysed and the results used to determine the regression formulas for bulk density.  The bulk density values were calculated for each model cell using a regression equation.

Pb, Zn, BaSO4, Au and Ag grades were interpolated into the empty block model using the Ordinary Kriging (“OK”) method and a “parent block estimation” technique, i.e. all sub-cells within a parent cell were populated with the same grade.  The OK process was performed at different search radii until all cells were interpolated. The search radii were determined by means of the evaluation of the semivariogram parameters, which determined the kriging weights to be applied to samples at specified distances.  The blocks were estimated using only assay composites restricted by the wireframe models, and which belonged to a corresponding lens and corresponding domain.  Block grades were validated both visually and statistically and all modelling was completed using Micromine software.

All mineralisation bodies are relatively close to the surface and exposed at the base of the existing pit and therefore potentially amenable to lower cost open pit mining,

The cut-off grade adopted for reporting (0.6% ZnEq) is considered reasonable given the Mineral Resource is likely to be exploited by open cut mining methods and processed using flotation techniques.

Preliminary open pit optimisation tests confirmed that the deposit has potentially positive net present value, and that almost the entire mineralised zone is potentially mineable using open pit methods under the given economic scenario and parameters.  The optimisation study was for the sole purpose of providing information to Adriatic Metals about the mining potential of the deposit at this stage of evaluation only, and also to meet the clause 20 of the JORC Code.  This study is conceptual in nature and does not represent any kind of Ore Reserve estimate.  The generated ultimate undiscounted pit shell was 650 m long x 500 m wide and about 230 m deep (Figure 14).

The Veovaca Mineral Resource has been classified based on the guidelines specified in the JORC Code, and it is therefore suitable for public release.  The classification level is based upon an assessment of geological understanding of the deposit, geological and mineralisation continuity, drill hole spacing, QC results, search and interpolation parameters and an analysis of available density information.  The MRE is reported by classification in Table 2, Table above a cut-off grade of 0.6% zinc equivalent. 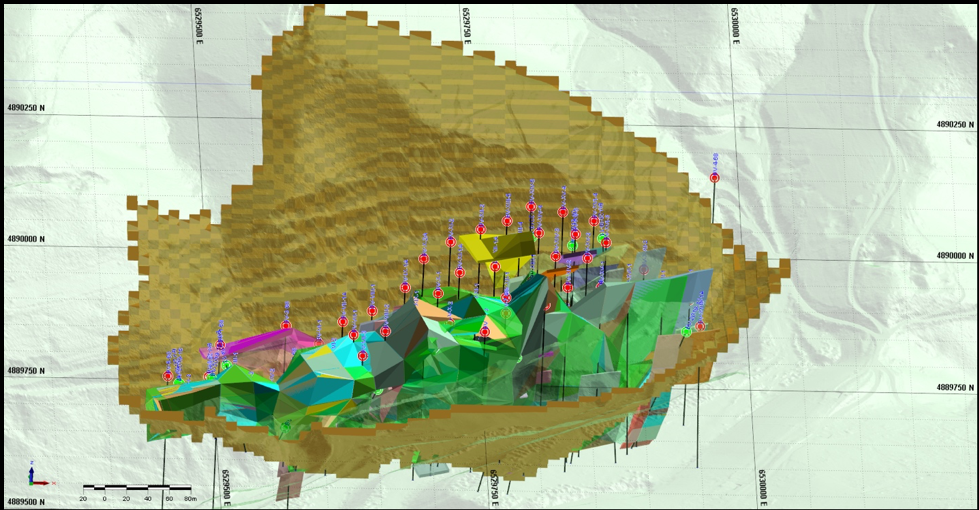