The Rupice Mineral Resource begins at the surface and currently extends to depths of 300m. The mineralisation remains open with significant potential to increase the size of the Mineral Resource.

The MRE is reported by classification in Table 1, with a cut-off grade of 0.6% zinc equivalent. Additional cut-off grades are shown below. 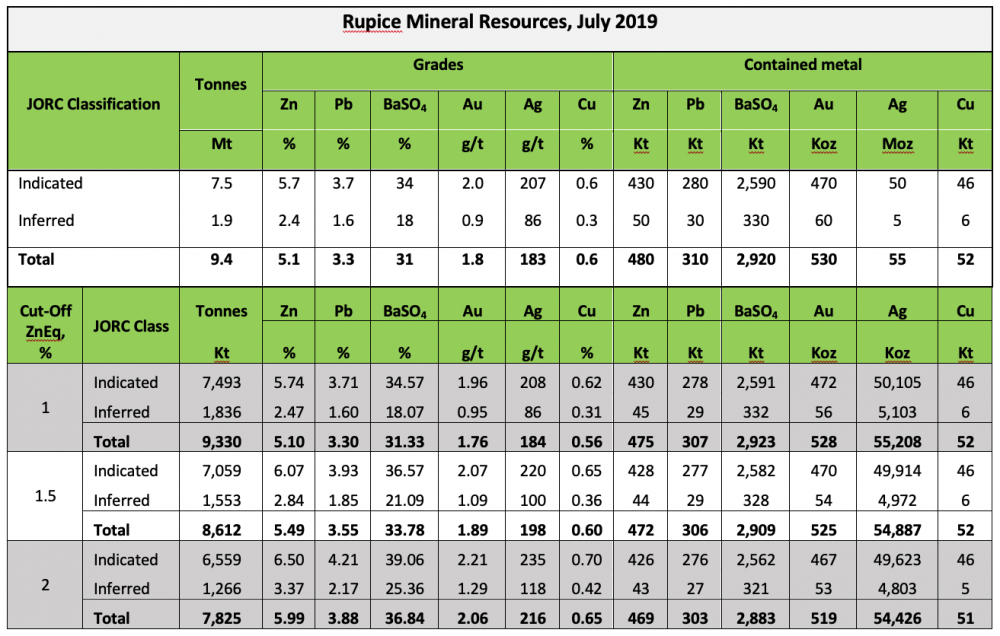 Figure 1: Geology, Drilling and Outline of OBM at Rupice 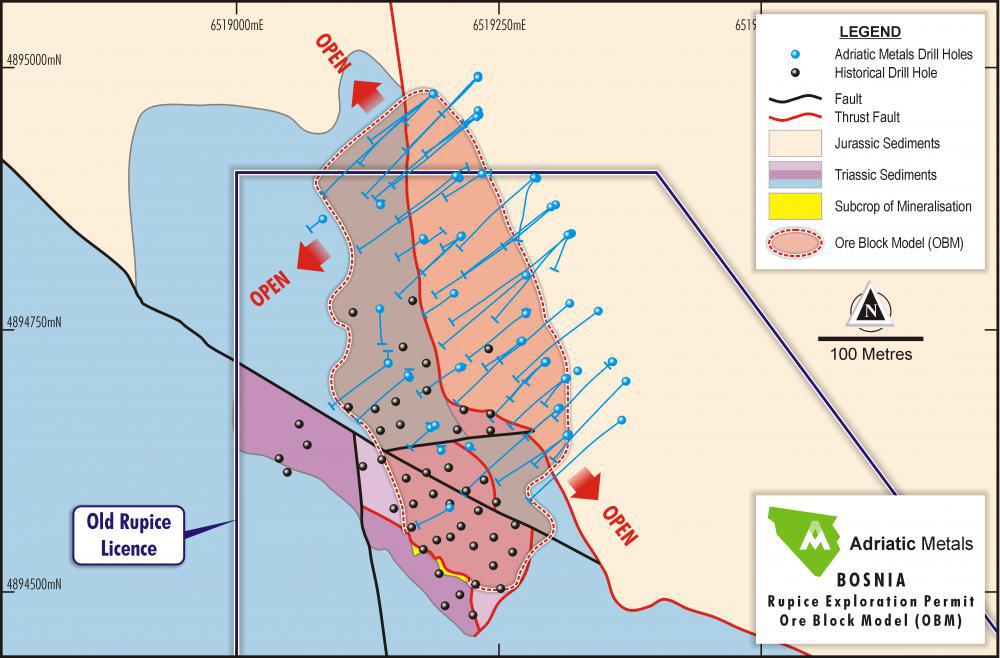 The Triassic sequence dips at around 50° to the northeast and has been intensely deformed both by early-stage ductile shearing and late-stage brittle faulting, which has resulted in a folded and thrusted (duplex ramped) sequence with thickening in a southwest direction. A typical geological cross-section to the south is shown in Figure 2. 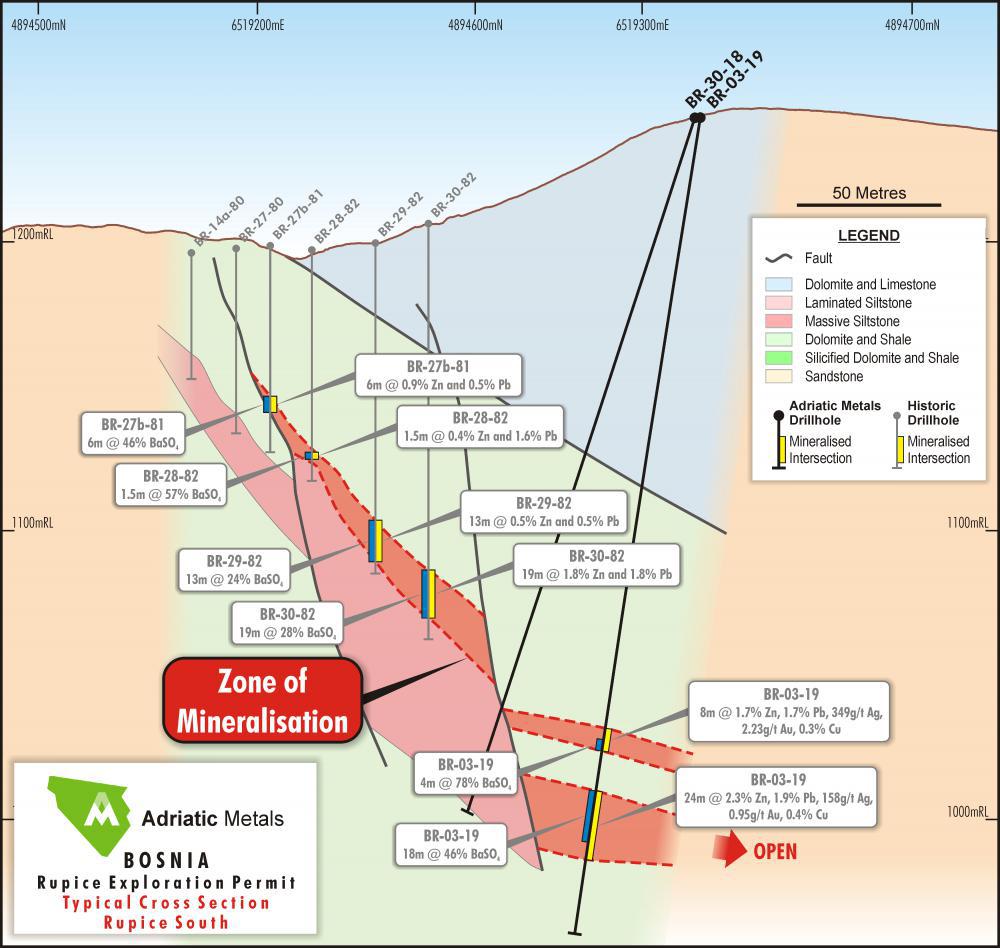 The mineralogy of the polymetallic mineralisation is relatively simple, it consists of pyrite, sphalerite, galena, barite and chalcopyrite with minor gold, silver, tetrahedrite, boulangerite and bournonite. Sphalerite is particularly light in colour suggesting that it has low iron content. The mineralisation was formed conformable to the bedding surfaces. The thickened portion occurs in a fold closure and forms a linear shoot that plunges to the north. Subsequent to sulphide deposition, steep faults formed ramps that wrapped around the mineralisation. Although its full extent is not defined by current drilling, the current extent of mineralisation is around 20m wide (measured down-dip) and can be traced for around 450m along strike. It is up to 60m thick.

A total of 106 diamond drill holes (49 historical drill holes and 57 drill holes from the Company’s 2017(8 holes), 2018 (39 holes) and 2019 drilling programmes (10 holes)) for 20,295 m define the current limits of the known mineralisation. Some 87 assayed drill holes intersect the interpreted mineralisation zones which remain open to the north, south and west. The deposit was sampled using diamond drill holes at nominal 20 m spacing on 20 m northeast-southwest oriented sections. Holes drilled by the Company were generally angled –60° to – 80° towards the southwest with dip angles set to optimally intersect the mineralised bodies, whilst most of the historical holes were vertical. Diamond core has been sampled for assay; whole core for the historical drilling and half core (HQ) for the recent drilling. Recent assays were undertaken by ALS in Bor, Serbia.

The main geological units and faults that control polymetallic mineralisation were interpreted using geological and structural logging, and were used to control the interpretation of the mineralised zones. The interpreted geological units were not wireframed, but they were used as a background as mineralised lenses were interpreted. Separate mineralisation outlines for each element were generated interactively for 17 NE-SW orientated cross-sections using individual cut-off grades that were established by the geostaHsHcal analysis. Six elements were modelled; Zn, Pb, BaSO5, Cu, Au and Ag, and four of them had two grade domains interpreted (outer ‘lower grade’ and inner ‘higher’ grade). An example of the interpretation of high and low-grade zinc domains relative to the geology is shown in Figure 3. 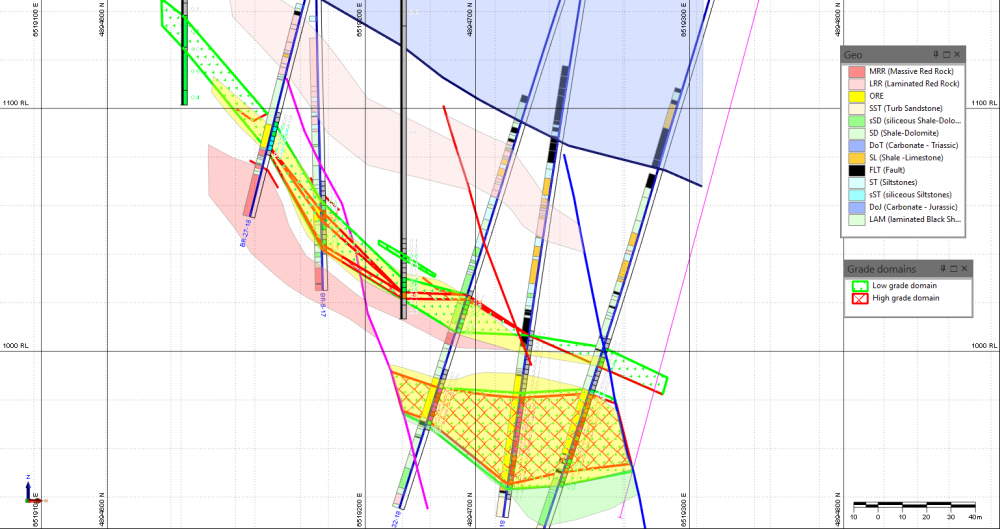 The interpreted strings were used to generate 3D ‘solid’ wireframes for each modelled element. Every cross-section was displayed on the screen along with the closest interpreted section. If the corresponding envelope did not appear on the next cross-section, the former was projected halfway to the next section, where it was terminated. Every interpreted mineralised zone was wireframed separately and individually. All wireframe models were validated for ‘closure’ and no ‘overlapping’ triangles. 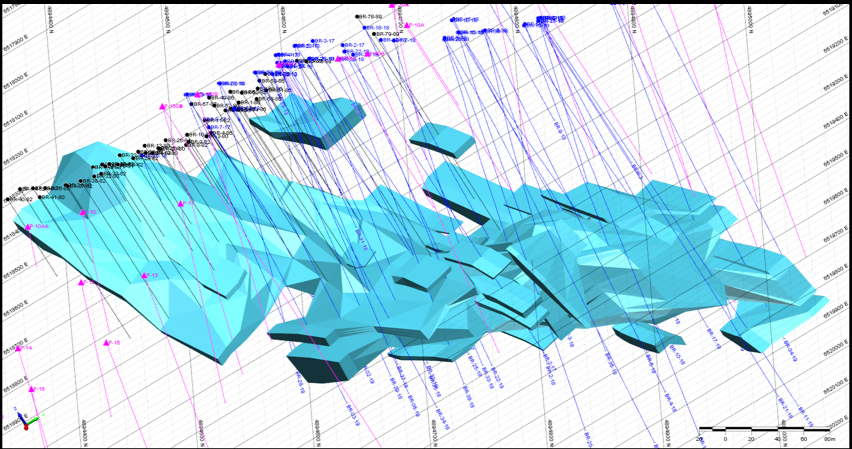 A block model was constructed, constrained by the interpreted mineralised envelopes.  A parent cell size of 10 m(E) x 10 m(N) x 5 m(RL) was adopted with standard sub-celling to 2 m(E) x 2 m(N) x 1 m(RL) to maintain the volumetric resolution of the mineralised lenses.

Pb, Zn, BaSO4, Au, Cu and Ag grades were interpolated into the empty block model using the Ordinary Kriging (“OK”) method and a “parent block estimation” technique, i.e. all sub-cells within a parent cell were populated with the same grade.  The OK process was performed at different search radii until all cells were interpolated. The search radii were determined by means of the evaluation of the semivariogram parameters, which determined the kriging weights to be applied to samples at specified distances.

Preliminary open pit optimisation tests confirmed that the deposit has potentially positive net present value (NPV), and that almost the entire mineralised zone is potentially mineable using open pit methods under the given economic scenario and parameters.  CSA Global did not estimate Ore Reserves for the deposit.  The optimisation study was for the sole purpose of providing information about the mining potential of the deposit at this stage of evaluation only, and to meet Clause 20 of the JORC Code.  The deposit appears to have reasonable prospects of eventual economic extraction under a realistic set of criteria.  The generated ultimate undiscounted pit shell was 750m long by 480m wide and about 430 m deep (Figure 5).

Figure 5: Ultimate Pit Shell for Purposes of Clause 20 of the JORC Code (west) 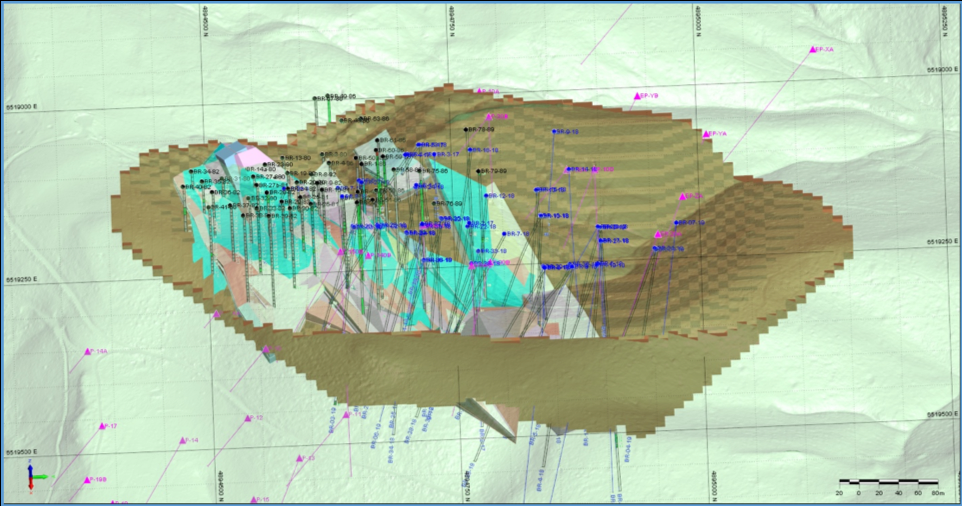 The Rupice Mineral Resource has been classified based on the guidelines specified in the JORC Code.  The classification level is based upon an assessment of geological understanding of the deposit, geological and mineralisation continuity, drill hole spacing, QC results, search and interpolation parameters and an analysis of available density information.